The Cumberland and Ohio Valley

After eleven years of blood, sweat and tears (not to mention $$$$) completing the MA&G, the question inevitably asked is,
"Why Would You Destroy Such a Beautiful Layout????" The answer is quite simple: I had completely lost interest in it. From its very inception, the MA&G was designed to be operated in a prototype manner with a crew of 6-8 operators. I had even gone to the trouble of entering the reporting data for every single piece of rolling stock into a car-forwarding software program. That was four years ago... and I never once felt compelled to move forward beyond that point. I think a lot of this inertia stemmed from, what I perceived to be, inadequate aisle width. Three foot aisles necessitate negotiating around others to pass them, even when simply viewing the layout as a visitor. Operations exponentially compound the issue, particularly on a double-deck layout. So I had made up my mind that operations wasn't for me. At the end of the day, what attracts me to the hobby is what originally hooked me at an early age; simply watching scale trains travel through miniature scenes of my creation. While some may call that a rail fan's approach to modeling, I prefer to think of a model railroad as an artistic expression. As such, I was ready to begin a new masterpiece on a fresh, clean canvas. Based on my experience/satisfaction with the MA&G, I formulated a list of changes/improvements that I wanted to incorporate on my new layout. These included...
Based on this list, I designed a railfan's layout with no consideration given to operation. However, during the process of dismantling the former MA&G, something unexpected and almost miraculous happened...I met, and developed a close relationship with, members of a local train club who assisted with the moving of the layout sections for the new owner. I also learned that most of them were extremely eager to operate my new layout once the "golden spike" was driven Their interest was contagious, so I returned to the computer and re-designed several areas of the layout; primarily for increased switching and staging considerations. The most regrettable concession was the elimination of the Royal American Shows carnival peninsula. This 4x16-foot scene, which can be seen in the scale model below, would have created the same 3-foot aisle widths that had plagued the old layout. By replacing it with a second wharf area and a small engine terminal, I could have 4 and 5 foot aisles instead. Problem solved!

The C&OV is located around the eastern Kentucky/southern Ohio part of the country. However, unlike the MA&G, it does not represent a corporate railroad per se. The name simply serves to give the layout a sense of geographic location. There will be no "C&OV" equipment or rolling stock. Instead, the layout will feature Class 1 railroads indigenous to the area; primarily the B&O, C&O, N&W, NYC, and PRR. However, I will still run MA&G freight cars in mixed freights as a tribute to the former layout. Over the years, I have continued to collect (horde?) more than 80 craftsman kits from such manufacturers as FSM, South River Model Works, FOS Scale, Bar Mills and Sierra West. My primary design goal is to include as many of these as possible on the C&OV.

Below you will find the updated Cumberland & Ohio Valley track plan (note that I'm still working on the town of Geldersburg). The wall dividing Fossport and Zane's Gorge is part of the original front wall of the building. Where the wall ends, an engineered beam carries the load for the remaining 10 feet. Fossport will include two wharf-themed peninsulas separated by a major river. The four mainline tracks will cross a pair of Walthers' bascule bridges in the front and a double-track CMR lift bridge in the rear. The Fossport peninsulas are large enough to handle 3 piers for my two Red Hook Wharf kits (1 and 2) and a Sheepscot Red Herring kit. Other waterfront kits will include Sierra West's Shipyard and Shelby Marine, an FSM Emporium Seafood, Bar Mills Hunch Landing, and a Fininian's Cannery by Retro-Tech (you probably need to Google that one). Geldersburg will feature rocky, multi-level craftsman kits by South River Model Works and Fine Scale Miniatures. Fahie will be dominated by a massive scratch-built coal prep plant. Georgetown will be a multi-level big city with an elevated viaduct for servicing a passenger station similar to the former Illinois Central depot in my hometown of Jackson, MS. 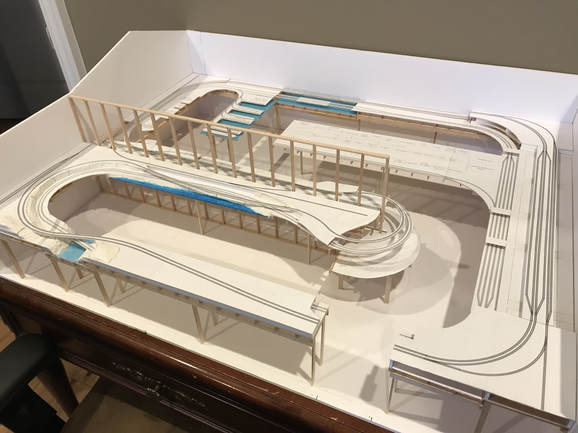