The Cumberland and Ohio Valley

The Cumberland & Ohio Valley (C&OV) is quite a departure from my previous Mississippi Alabama & Gulf. Unlike the MA&G, it does not represent a corporate railroad per se. The name simply serves to give the layout a sense of geographic location. The C&OV features several Class 1 railroads that had trackage in West Virginia; primarily the B&O, C&O, N&W, NYC, and PRR. These railroads enter the layout from six hidden staging yards representing Pittsburgh PA, Middlesboro KY, Cumberland MD, Columbus OH, Portsmouth OH, and Richmond VA. Using railroad maps of the era, I drew a route through non-rail-serviced areas of the state and created fictional towns named for members of my operating crew. These include Stanton, Graves, Latham, Haggard and Collins. The town of Colton, named for my youngest son, has a yard where most of the railroads interchange traffic. The interchange-based operating scheme of the layout has earned it the nickname, "The Appalachian Joint Line".

The layout was initially designed for continuous running of four trains on two double-track mainlines at different heights. Passing sidings, a 4-track station and 6-track yard would provide places for nine trains to be "on stage" at any time. During the process of dismantling the old MA&G layout, I met several local guys who were very interested in operating the new layout once it was built. This ignited a renewed interest in operations, so I redesigned parts of the layout to allow room for six hidden staging yards and a minimum of four-foot aisles, with most being five or six feet wide. The more difficult task was then creating a system map based on the track plan and staging yards. In the end, I was extremely happy with my final draft. Referring to the map below, let's take a tour around the layout beginning at the east end town of Stanton.

Stanton, WV is a small town with three rail-served industries (Blue Ridge Pickles, Holditch Furniture, H.W. Myers Feed and Fuel) and a depot. On the east end, an assortment of bridges crosses the Little Kanawha River that leads to the Richmond, VA staging yard. The prototype river is a tributary of the Ohio river and meanders throughout the layout. It continues to the other side of the aisle at Graves and is seen again at Collins. Hidden underneath Stanton is the four-track Cumberland, MD staging yard and the lower mainline tracks to the Middlesboro, KY staging yards. Both levels cross a pair of hinged lift bridges to pass in front of the door.

Colton is the largest town on the layout and represents a large city. It features a six-track yard with a turntable, 15 stall roundhouse, and servicing facilities for both steam and diesel locomotives. Also located in Colton is Union Station which has elevated passenger platforms on a 16-foot long viaduct. Two platforms service four passenger tracks for both Union Station and the adjacent Railway Express building. There are also two tracks for freight traffic, one of which serves as a set out spur for Allied Wholesale Grocers and Anderson Manufacturing. At the east end of the viaduct is the large Swift Packing Co. The facility has three separate tracks for the stock pens, the ice platform and shipping. The west end of Colton is home to Blue Star Plastics which represents a newer industry built in 1970. It has a silo track for unloading plastic pellets and an interior warehouse track for shipping. Hidden under the upper part of Colton are two, five-track staging yards representing Pittsburgh, PA and Middlesboro, KY.

The next town westbound is Collins, WV. Collins is fictionally located along the banks of the prototype Little Kanawha River near Parkersburg, WV. Here, the four mainline tracks cross a pair of operating Walthers bascule bridges in the front and an impressive span of eight double-track arched Pratt truss bridges near the back. A highway also crosses the river over a vertical lift bridge kit made by Custom Model Railroads. The banks of the river continue forward on two parallel 4' x 6' peninsulas. The west peninsula features the Mountain State Paper Mill with separate tracks for unloading of kaolin, loading of waste chemicals, a warehouse, receiving of liquid chemicals and unloading of woodchip hoppers via a rotary dump. The West Virginia Cement Plant is located on the east peninsula. It also has five tracks for spotting cars including a holding track for inbound empties, two loading tracks, a track for unloading additives such as gypsum, and a shipping warehouse for bagged cement. Limestone is brought in by barge and transferred to a conveyor system by crane.

Continuing west, we next come to Haggard, WV. The lower mainlines disappear under the town so that only the upper mainlines are visible. Also located underneath is the three-track Columbus, OH staging yard. Haggard boasts a depot and three rail-served industries. Hidden behind the depot are the upper staging yards for Richmond, VA and Portsmouth, OH. Each has three tracks.

As the lower mainlines emerge from hidden track under Haggard, trains enter Latham, WV. Latham is home to the sprawling Valentine Coal Co. Prep Plant. The main mine has a capacity of 40 coal hoppers on its four tracks. There is a two-track dump house where coal from other mines is brought in to be cleaned and sorted. Yet another track is used for spotting and unloading tank cars. When complete, there will also be a truck dump on the opposite side of the main line with a conveyor going to the facility along with numerous company houses. The upper mainlines will be hidden from view behind the prep plant until they emerge from a tunnel portal and curve around upper Latham. This area features company houses, an automotive garage, a BBQ joint, and a hotel complete with an observation deck for railfans to view the trestle below.

Leaving Latham, the lower mainlines curve around the original front wall of the building, supported by a massive double-track wooden trestle. The upper mainlines hug the edge of a sloping rock face that extends to the base of the gorge.

The last modeled town on the line is Graves, WV which features three industries. On the upper line, the H.B. Tubbins Lumber Co. has three spur tracks for unloading logs, loading woodchips and a covered loading shed for lumber shipments. The Valentine Coal Co. has a small tipple here (Mine #2) with a lower dump house for mine carts and truck dump connected up the hill by a conveyor. On the lower line, the single-spur Hechinger Bag & Burlap Company is located near the Graves depot and a small food stand. Trains that pass through upper Graves on the south track do so over a huge steel trestle constructed from 28 Walthers kits. The supports stand in the Little Kanawha River. Through a pair of tunnel portals at the west end of Graves, trains can enter the Portsmouth, OH staging yard or take an alternate route that allows for continuous running back to our starting point, Stanton. This connecting track, as well as the entry point to the Richmond, VA staging yard, is hidden by a mountain side. A curving dirt road passes by country store and a rural church, as well as company houses for the Valentine tipple. This area is located above my desk/workbench.

Check out the galleries below to see more photos of these areas during different levels of construction. I will be updating them much more frequently as progress is made. Also, the new Operations page will share details, photos and videos related to the sequence timetable, car forwarding, dispatching, staging yard detection and my Op Sessions. 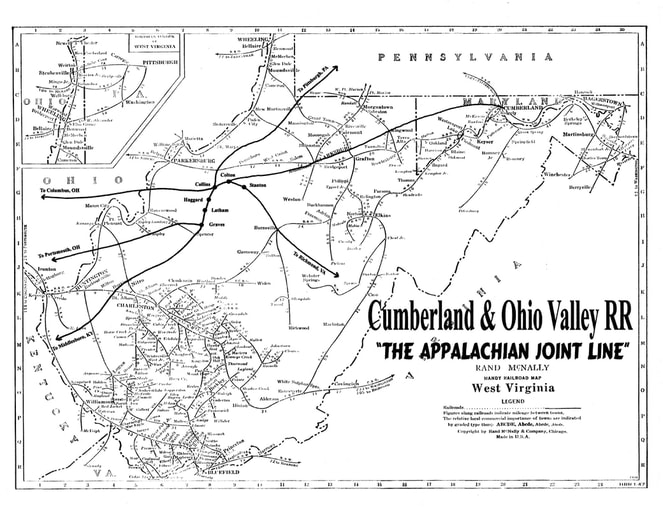