The Hooterville, Bugtussle and Pixley

A couple of years after the MA&G was completed, I decided to tackle a G-scale garden railroad behind our pool. The design goal was simply to be able to run three trains simultaneously, without supervision, during social gatherings. To accomplish this, a track plan consisting of three separate loops in kidney, dogbone and Figure-8 configurations was created. As the railroad was strictly intended to be an aesthetic addition to our backyard, no specific prototype was chosen. Instead, the layout serves as an homage to my favorite three cross-over television shows growing up...Green Acres, Petticoat Junction, and The Beverly Hillbillies. Figures represent such notable characters as Oliver and Lisa Douglas, Mr. Haney, The Monroe Brothers, Arnold and Fred Ziffel, the Clampett clan, and Billie Jo, Betty Jo and Bobby Jo Bradley bathing in the water tank. Structures were modified to better resemble the Douglas farm, Drucker's store, the Clampett cabin and the Shady Rest Hotel. Eventually I will add a small building outside of the fence for storage of the consists. A spur has been put in place to feed a track into the building through a doggy door-style entry point. Until then, the rolling stock and locomotives are kept in our store room.

While the labor involved was sweaty and, at times, back-breaking, I still enjoyed building my garden railroad as much as any other project I have pursued. What I enjoy most is simply turning on the power and watching the three trains wind their way through the scenery. This realization had a tremendous impact on my design philosophy for the Cumberland & Ohio Valley. I will be able to enjoy this same experience, but with four trains (as many as eight can be run at a time with four operators to monitor their locations). The Hooterville, Bugtussle & Pixley enjoyed its first Open House in the summer of 2017. Check out my HB&P Construction Video here! 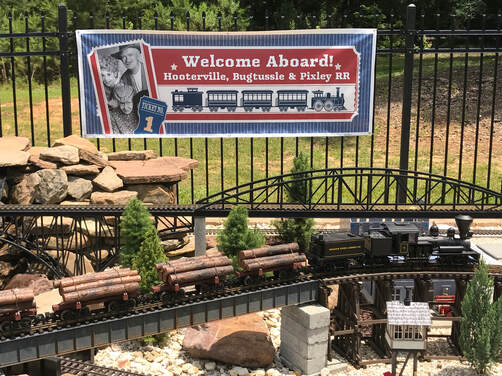